Kanye West might have outdone himself last night.
The vile rapper interrupted country singer Taylor Swift during her acceptance speech and told her the award should have gone to someone else. 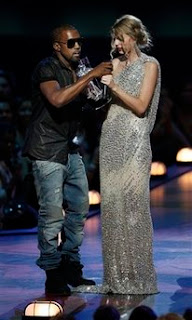 US rapper Kanye West stole the show for the wrong reasons at the MTV Video Music Awards last night when he invaded the stage and interrupted a winner to say that the award should have gone elsewhere.

West grabbed the microphone as Taylor Swift, a teenage country singer, was part way through her acceptance speech for the prize – known as a Moonman – for best female video.

“I always wondered what it would be like to maybe win one of these someday, but never actually thought it would happen,” Swift had begun to say, when West snatched the microphone from her hand.

“Taylor, I’m really happy for you, and I’m gonna let you finish, but Beyonce had one of the best videos of all time,” said West, who had been spotted earlier swigging alcohol on the red carpet. A humiliated Swift did not finish her speech, the crowd began to boo, and Beyonce looked shocked but continued to smile.

It’s hard to say which is worse… Kanye blaming Bush for killing black people in New Orleans or Kanye ruining the night for a teenage country music star?