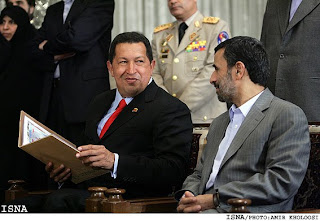 The killer regime hosted Venezuelana Marxist Hugo Chavez this week. Chavez said his country is ready to provide Iran with gasoline amid the continued threats of Western sanctions. (ISNA)

For the first time in 20 years the Iranian Regime will cancel Ramadan prayers at Khoneini’s tomb. They fear the opposition will hold protest rally at the event.
Rooz Online reported:

During the past few weeks, unofficial reports surfaced indicating pressure on Seyyed Hassan Khomeini to remove Seyyed Mohammad Khatami from the list of Ehia night speakers. In response to this pressure, the public relations office of Ayatollah Khomeini’s shrine announced that this year’s Ehia night prayers will be cancelled due to “problems facing the holy shrine of the Imam.” Observers note that the cancellation indicates that Ayatollah Khomeini’s descendants prefer not to host any other speakers for the prayers if Seyyed Mohammad Khatami is not allowed to speak at the Ehia prayers held at Ayatollah Khomeini’s shrine.

Hassan Khomeini, who established himself as a member of the opposition by not attending Mahmoud Ahmadinejad’s inauguration ceremony, has a very close relationship with Seyyed Mohammad Khatami. Throughout the presidential election, news sources had reported the support of Ayatollah Khomeini’s family for Mir-Hossein Mousavi.