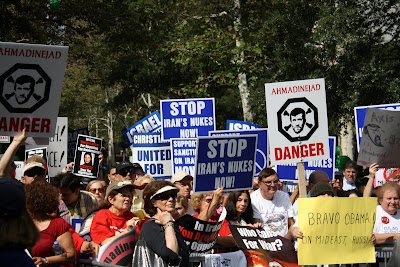 Yesterday, President Obama and leaders of the United Nations Security Council signed an agreement. The global leaders demanded a serious response from Iran over their nuclear program.
Today, the Iranian regime announced that they have a second secret nuclear facility under construction.
Reuters reported:

Iran has told the U.N. nuclear watchdog it has a second uranium enrichment plant under construction, a belated disclosure sure to heighten Western fears of an Iranian bid for atom bombs.

The International Atomic Energy Agency said on Friday Iran had revealed the existence of the plant to IAEA Director-General Mohamed ElBaradei on Monday, just as six world powers and Iran prepare to discuss its disputed nuclear drive on October 1.

The IAEA said Iran had told ElBaradei in a letter that the plant would enrich uranium only to a level needed to generate electricity.

“The agency also understands from Iran that no nuclear material has been introduced into the facility,” International Atomic Energy Agency spokesman Marc Vidricaire said.

The agency requested specific information and an immediate inspection of the plant to ensure it was for peaceful purposes.

Today at the G20 Meetings President Obama and the leaders of France and Great Britain were going to accuse Iran of a secret nuclear facility.
It looks like Iran beat them to the punch.