The Horror!… The Absolute Horror!
It looks like the state-run media has found their new Abu Ghraib.
They’re hoping so anyway and you’re supposed to feel outraged after reading this news.

CBS released photos of supposed “hazing” by a private security company operating in Afghanistan.
Here’s one of the “shocking hazing” photos: 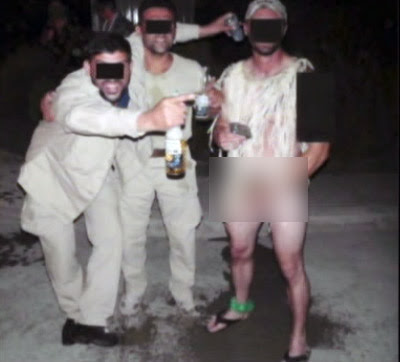 Yeah, looks pretty horrible, huh?
Excuse me, but why are liberals such absolute wu$$ies?

Here is the latest military-bashing nonsense from the democrat-media complex.
CBS is calling this “shocking hazing” at a military base in Kabul. It’s not until you read the article that you find they are talking about a private security firm and not US soldiers.

On August 4, rockets land near the U.S. Embassy in Kabul. On August 15, a suicide bomber hits close by killing or wounding 98. The attacks punctuate the dangers faced by hundreds of American diplomats and staff who work there. Yet some of the Embassy’s own security guards are alleging shocking work conditions that put American lives at risk.

In numerous e-mails, the guards describe a crisis in discipline and morale, understaffing, sleep deprivation, “threats and intimidation.” One guard refers to a group of guards and supervisors from the security contractor ArmorGroup as “sexual predators, deviants running rampant.”

Guards provided dozens of graphic photos and videos depicting shocking scenes of hazing and humiliation by superiors, most of them too lewd to show. The guards recount a climate of fear and coercion where those who refuse to participate are retaliated against, even fired.

The State Department contracts with a private security firm – ArmorGroup North America, owned by Wackenhut. ArmorGroup employs 450 guards at the Kabul Embassy – two-thirds from Nepal and India, the rest from the U.S. and other English-speaking nations. Fifteen guards have brought their concerns about embassy security to the watchdog group Project on Government Oversight, reports CBS News investigative correspondent Sharyl Attkisson.

“These people have to rely on and trust each other for their lives, and you have a total breakdown in that trust, a complete breakdown in the command structure,” said Danielle Brian, with the Project on Government Oversight.

Records show the State Department has warned the ArmorGroup about security problems for at least two years, yet renewed its contract as recently as July.

“What you have is sort of a predatory mentality where you’ve got supervisors that are humiliating the new recruits coming in,” Brian said.

Project on Government Oversight is a government oversight group.

The information in the article is from anonymous sources.
Sorry, but this reeks of another leftist attack on the military and the Afghanistan campaign.

I’ll tell you what’s outrageous— Catching Democrats instructing supporters on how to disrupt town hall meetings, putting it up on YouTube, and watching CBS totally ignore the story!