Is this legit?… Or, is this another fake hate crime where the criminals turn out to be leftist thugs?

The studio that designed the Obama HOPE poster was tagged with anti-ACORN graffiti this week.
This photo comes from Media Bistro and HotAir: 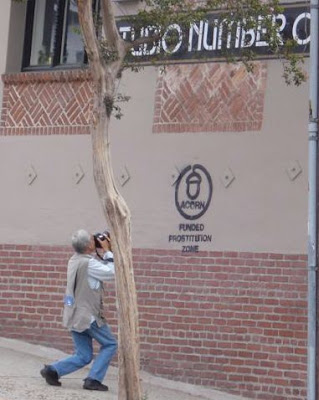 The Eastsider LA has an interesting picture of Gary Leonard photographing a spray-painted sign on the exterior wall of Shepard Fairey‘s studio. The sign reads “ACORN Funded Prostitution Zone” and its location suggests that Fairey or someone in his crew is behind the image. Or maybe it’s just another local graffiti artist who wanted to share with his colleagues.

Of course, tagging buildings is a favorite tactic of the Bible-beating, gun-toting rightwing Christianists.
The Washington Post eagerly reported this story:

So much for HOPE. That, at least, is the symbolic message sent by an anti-ACORN activist or group that targeted Studio Number One in Los Angeles, the commercial design studio of Obama HOPE poster creator Shepard Fairey, with anti-ACORN graffiti.

The Association of Community Organizations for Reform Now has drawn conservative wrath this month after hidden-camera videographers taped its workers giving housing and other advice to a couple purporting to be a pimp and a prostitute. The White House quickly backed away from the group in the wake of the video sting, first published on new conservative Web site BigGovernment.com, with the House on Thursday voting to cut federal funding for the group.

The anonymous anti-ACORN activist or activists tried to link the anti-poverty group to the man who helped create the iconic image of the Obama campaign by targeting his studio with an image of the ACORN logo beneath the words “ACORN Funded Prostitution Zone.”

Studio Number One does not receive any funds from the government, according to a spokesman, and does no work for ACORN.

“While we support free expression, it is ironic that…the conservatives and right-wingers who called pro-Obama art propaganda and if it was posted publicly, they called it vandalism, are now vandalizing private property in their campaign against ACORN,” said Jay Strell, a spokesman for Studio Number One and Fairey. The graffiti has been removed, he added.

Of course, the Washington Post has no evidence at all that rightwing radicals caused this destruction.
But, since when did facts matter to the state-run media?