You’ll never see this in the US press–
The Telegraph reported:
“Group once linked to Barack Obama taped giving advice to ‘brothel owners'” 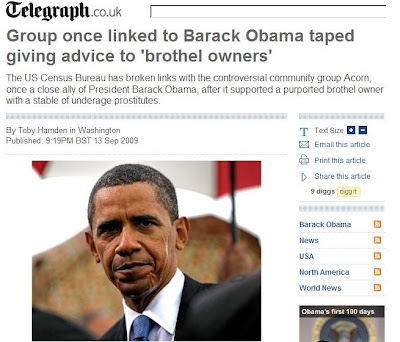 The Telegraph reported what the US state-run media is hiding from the American public– That the US Census Bureau has broken links with the controversial community group Acorn, once a close ally of President Barack Obama, after it supported a purported brothel owner with a stable of underage prostitutes.

One of Barack Obama’s first big “community organizer” jobs involved ACORN in 1992. Obama also trained ACORN employees. He represented ACORN in court. Obama worked with and protested with ACORN. His campaign donated $800,000 to ACORN this year for voter registration efforts.
And, ACORN even canvassed for Obama last year.

Maybe that’s why the US media refuses to touch this story– It might make the radical in the White House look bad.

Related… The ACORN story is not the only news the state-run media is ignoring.
Last week The New York Times refused to report on the Van Jones scandal.
Their first print story on the controversy hit the streets more than a day after he resigned.
Kyle Smith at the New York Post reported on this embarrassment:

Long after Glenn Beck reported — back in July — that Jones was history’s first communist czar, and even after Gateway Pundit reported, on Sept. 3, that Jones had signed a wackadoodle 9/11 “truther” petition, The Times sent two reporters to Boston (in a story published Friday, Sept. 4) to pre-report the non-story of Joseph P. Kennedy II’s run for Ted Kennedy’s seat. (He later said he wasn’t interested. Also, the picture of Joseph the Times ran was actually of his brother Max.)

Granted, the Times must devote a lot of personpower to its vast corrections column. But if it is so flush that it can afford to hire, like the boy with the shovel who follows the elephant in the parade, a personal fact checker for TV critic Alessandra Stanley, surely it can scrounge up an intern to report that there’s a communist truther working as the president’s green jobs czar, or that a congressman was demanding his resignation (Sept. 4).

Jill Abramson, the managing editor, admitted only to being “a beat behind” the story but added that the paper had caught up — after the saga was over. The EMS equivalent of this statement would be, “Sorry I didn’t take your 911 call for four days. At least I was in time for the funeral.”

Although Abramson’s excuse was not an excuse, she proceeded to offer another one: “Mr. Jones was not a high-ranking official.”

Oh. And here I was, thinking that he was “one of Mr. Obama’s top advisers,” as I was told by, well, The Times, on its Caucus blog on Sept. 5. Confusing, confusing.

Only in Timesland can you be in charge of doling out $80 billion in contracts (“A Small White House Program” — The Times’ John M. Broder, on Sept. 6) and be less important than the Naked Cowboy.

Big Government continues to be all over the ACORN prostitution scandal.