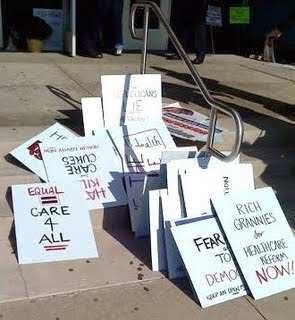 According to the article in the newspaper, these signs were produced by a lady named Karen MacKenzie. According to Open Secrets, she lives in Northville, which is not part of Peter’s district.

Tsk-tsk- the invite said ‘constituents only’, Ms. MacKenzie. Oh, I also notice that she is married to an activist judge in Oakland County who is chair of the local Sierra Club. This information was pulled off later versions of the Detroit News story.