Leftist Caller Tells Receptionist: “I put a bomb in your building b*tch!” 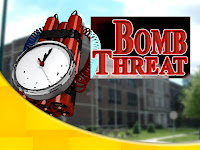 On the eve of what organizers call a ‘Big Ol’ TEA Party’, the Washington, D.C., offices of FreedomWorks were evacuated by DC Metro police on Friday afternoon after the conservative organization reported to authorities at 3:42 pm ET that it had received a bomb threat.

My colleague, ABC News’ Teddy Davis has the story:

Tens of thousands of anti-big government activists are expected in Washington on Saturday as part of a “March on Washington” being organized by FreedomWorks, a conservative group headed by former House Majority Leader Dick Armey, R-Texas.

A FreedomWorks staffer told ABC News that the organization’s offices at 601 Pennsylvania Avenue were evacuated on Friday afternoon by DC Metro Police because of a bomb scare.

The threat came when a man called the FreedomWorks main line and told the organization’s female receptionist: “I put a bomb in your building, bitch.”

Of course, it surprises no one that the left would resort to violence when their power under threat.

UPDATE: The democrats are concerned about a massive turnout today in DC.
Initial estimates suggest from 1-2 million patriots may show up for the march and rally today at the nation’s capital.