In case you didn’t hear…
For the first time in history the United States government is siding with Marxist leaders Hugo Chavez, Daniel Ortega, Raul Castro and Evo Morales against the pro-democratic Honduran President Micheletti.

The Honduran Congress and Supreme Court along with the military ousted Leftist President Manuel Zelaya from power after his illegal moves to secure his presidential post as a lifetime position. The Honduran government appointed Roberto Micheletti president until the planned elections in November. Zelaya was, of course, supported by local Leftist regimes in Venezuela, Bolivia, and Cuba.

This woman was one of my favorite protesters today– 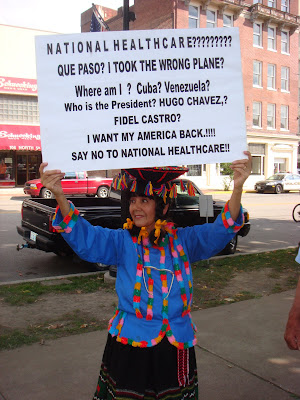 Hat Tip Bridget
It was encouraging to see her speak out against the Obama administration’s confusing policies.