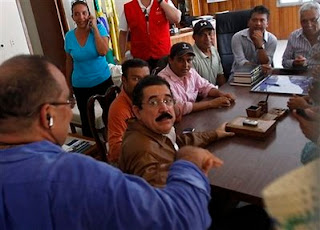 Honduras’ ousted President Manuel Zelaya, center, meets with advisors and members of his cabinet inside the Brazilian embassy in Tegucigalpa, Monday, Sept 21, 2009. Zelaya returned to Honduras Monday to reclaim his presidency, he said, defying threats of arrest and summoning supporters. (AP Photo/Esteban Felix)

Ousted President Manuel Zelaya returned to Honduras on Monday almost three months after he was toppled in a coup, and took refuge in the Brazilian embassy in the capital to avoid arrest.

Reuters photographer Edgar Garrido saw Zelaya with aides and his wife in the embassy, and the leftist president gave media interviews from inside the building.

Zelaya’s ouster on June 28 in a dispute over presidential term limits plunged Honduras into its worst political crisis in decades, and was criticized by U.S. President Barack Obama, the European Union and Latin American governments.

His return raises the stakes for the conservative de facto government, which was installed after the coup and which has defied international pressure to let Zelaya return.

Once again the state-run media avoids explaining that Zelaya was attempting to hijack the Honduran constitution before he was arrested and ejected from the country back on June 28.

Honduran El Heraldo news reported that Zelaya was waiting for OAS and UN officials to fly in tomorrow to help him take back the presidency.

Fausta is following the developments.

UPDATE: The leftists are mobilizing! Ashley Rindsberg is reporting from Tegucigalpa, Honduras.