Can we call him a socialist yet? 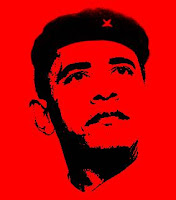 By 2012, nearly $1 trillion from the top 30 percent of American families will be redistributed among the bottom 70 percent if Obama’s proposals on taxes, health care, and climate change become law, according to the Tax Foundation.

“Even if none of Obama’s policies becomes law, the extent of income redistribution is remarkable,” Scott Hodge, president of the nonpartisan, nonprofit organization, said. “The top-earning 40 percent of families will transfer $826 billion to the bottom 60 percent in 2012.”

Under the Obama plan, 70 percent of American families as a group — those earning less than $109,460 — will receive more in benefits than they pay in taxes, Hodge said.

“The majority of people below the 70 percent mark will get more back than they pay in taxes,” Hodge told CNSNews.com.

Related… Obama is open to taxing soda and sugary drinks.
What a shock.