** Republican Congressman screams, “You lie!” at Obama during his speech. ** 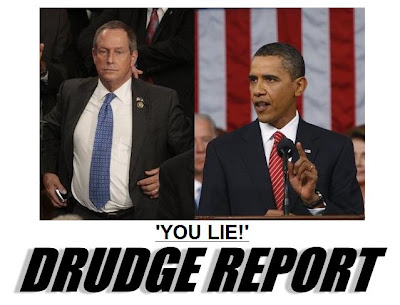 Obama had just said that illegal immigrants would not be covered under his health care plan:

On the bright side…
It only happened once.

Obama also took a personal swipe at Sarah Palin and her death panels during his speech.
— Sarah Palin responded.

UPDATE: AllahPundit reports: “The culprit was South Carolina rep Joe Wilson, who felt moved to act when The One told what was, in fact, a lie. Although certainly not his biggest of the night.”

UPDATE: Wilson apologizes for the outburst.

UPDATE 2: Rep. Wilson may have been rude but he was right.
Hat Tip Bruce

UPDATE 3: Dems booed Bush back in 2005 when he correctly predicted Social Security’s demise if Congress did not take steps to avert that outcome.