SUCH DEFENSES ARE NOT FOR THE LITTLE PEOPLE: Tax Court Rejects Taxpayer’s Attempt to Use Geithner’s TurboTax Defense. “Petitioners were not permitted to bury their heads in the sand and ignore their obligation to ensure that their tax return accurately reflected their income for 2006. In the end, reliance on tax return preparation software does not excuse petitioners’ failure to review their 2006 tax return.” With bonus Geithner video.

It pays to work for Uncle Sam– 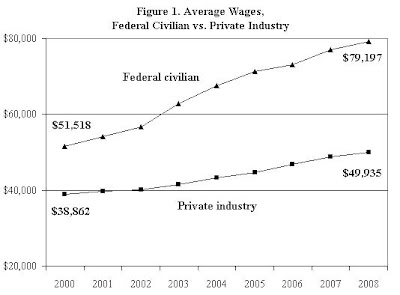 The Cato Institute reported that the pay advantage enjoyed by federal civilian workers over private-sector workers continues to expand.

And, then there’s this government hypocrisy reported at the The Washington Times:

A month after they voted to punish some corporate executives for taking hefty bonus payouts, members of the House of Representatives quietly gave their own staffers a new potential bonus by making even their top-earning aides eligible for taxpayer dollars to repay their student loans.

Is it any wonder that seventy percent (70%) of likely voters now favor a government that offers fewer services and imposes lower taxes over one that provides more services with higher taxes.