Dear Leader will honor noted anti-American and anti-Semite with the nation’s highest civilian honor- The Medal of Freedom.
The New York Post reported:

THE Medal of Freedom is the nation’s highest civilian honor. Past recipients include John Wayne, Norman Rockwell and Vaclav Havel. This year, one of the 16 recipients President Obama selected (along with such worthies as Sen. Edward Kennedy and the late Jack Kemp) is former Irish President and UN High Commissioner for Human Rights Mary Robinson.

Robinson’s views are well out of the American foreign-policy mainstream. Rep. Peter King (R-LI) says, “She is definitely from the school of moral equivalency which somehow invariably comes down on the side against vibrant democracies such as Israel and the United States.”

Despite her noble commitment to human rights, Robinson has become a symbol of all that’s wrong in the human-rights community and the United Nations — of the tendency to appease dictatorships, rationalize terrorism and bash the West.

She is perhaps best known for presiding over the 2001 World Conference Against Racism in Durban, South Africa — which targeted the West, especially Israel, while overlooking racism in Arab countries. The conference was so biased the United States and Israel boycotted it.

In the tense months before convening in Durban, Robinson failed to listen to pleas from Secretary of State Colin Powell and Rep. Tom Lantos (D-Calif.), among others, to stop Arab dictators from hijacking an anti-racism conference to advance their anti-Zionist agenda. Afterward, she declared the disaster a success, even after she herself belatedly condemned the vicious anti-Semitism coursing through the streets of Durban at a parallel forum of nongovernmental agencies. 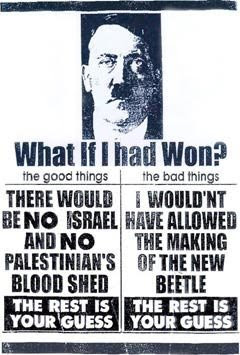 Here is an anti-Semitic poster from the 2001 Durban Conference that Robinson hailed as a great success. (EYE on the UN)

The Anti-Defamation League has already issued a statement criticizing Obama’s decision to award the Presidential Medal of Freedomn to Mary Robinson.