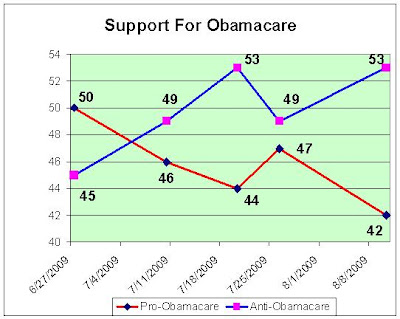 Public support for the health care reform plan proposed by President Obama and congressional Democrats has fallen to a new low as just 42% of U.S. voters now favor the plan. That’s down five points from two weeks ago and down eight points from six weeks ago.

A new Rasmussen Reports national telephone survey shows that opposition to the plan has increased to 53%, up nine points since late June.

More significantly, 44% of voters strongly oppose the health care reform effort versus 26% who strongly favor it. Intensity has been stronger among opponents of the plan since the debate began.

Sixty-seven percent (67%) of those under 30 favor the plan while 56% of those over 65 are opposed. Among senior citizens, 46% are strongly opposed…

Most notable, however, is the opposition among voters not affiliated with either party. Sixty-two percent (62%) of unaffiliated voters oppose the health care plan, and 51% are strongly opposed.