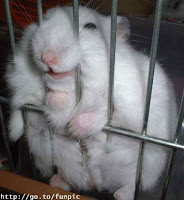 Why is this not surprising?
Stimulus money will be awarded to study how methamphetamine influences the sexual behavior of rats.
The NY Post reported, via Drudge:

The stimulus package is living up to its provocative name by funding a bacchanalia of behavioral sex research, a Post analysis reveals.

The next fiscal year is set to be one of the friskiest ever in the nation’s science labs, as researchers probe the ins and outs of sex patterns among humans and even some of our four-legged friends.

Among the most titillating grants awarded by the National Institutes of Health are studies that would:

* Evaluate “drug use as a sex enhancer” in an analysis of “high-risk community sex networks” at the University of Illinois, Chicago. That study will cost $123,000.

* Study how methamphetamine, thought to produce an “insatiable need” for sex among users, “enhances the motivation for female rat sexual behavior.” Some $28,000 has been awarded for the University of Maryland at Baltimore study.

It’s not like rats need any help with stimulation…
One pair of rats has the potential for 15,000 descendants in a year.
Male and female rats may have sex twenty times a day.
They don’t need meth.