The astroturfers at Think Progress are running this headline today:

“Durbin Responds To Lobbyist-Run Efforts To Harass Town Halls: We ‘Won’t Fall For A Sucker-Punch Like This’”

ThinkProgress reported today on the growing number of angry right-wing activists viciously harassing Democratic, as well as moderate Republican, members of Congress on health care reform. Jonathan Cohn wrote that these tactics represent “classic astroturf organizing, in some cases bankrolled by the health care industry.” The insurance industry is sending staff members to over 30 states to “confront” lawmakers about health care reform. Simultaneously, Cohn writes, the health care industry will use the August recess to “flood the airwaves with ads picking apart reform legislation.” Indeed, AHIP, the lobbying juggernaut for the health insurance industry, has promised to change its tone and begin running negative ads on reform soon.

Now there is proof of lobbyist infiltration!
Photos and video from the McCaskill town hall in St. Louis show lobbyist funded astroturfers at the event…
Far Left astroturfers– 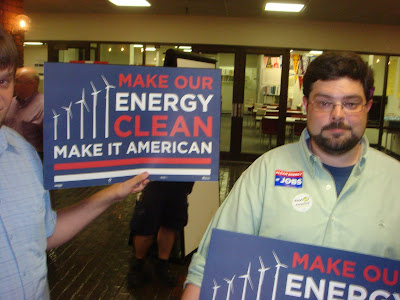 And, Sharp Elbows interviewed several of these leftist protesters at the event:
These protesters may be well-funded and organized but they have no idea what they stand for.

More… American Spectator Blog has more on this ridiculous conspiracy on the Left that the tea party protesters are funded by the insurance industry.