A pro-Obamacare thug was arrested after threatening tea party patriots in Georgia this past week. 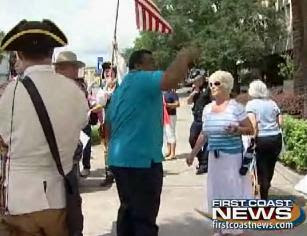 The violent tea party crasher was later arrested after he threatened the police.
The Tea Party Patriots had a permit for their protest.
First Coast News reported:

A man has been arrested in downtown Brunswick after disrupting a Tea Party protest against the Democrats’ healthcare reform plan.

Around 20 members of the Golden Isle Tea Party Patriots and other participants were holding signs and waving at passing cars in front of the main post office.

First Coast News was there when Zack Lyde from Brunswick walked up shouting at the group and started a verbal confrontation with protesters.

When a Brunswick police officer asked Lyde to leave, he refused. As officers tried placing him under arrest, he attempted to wriggle out of their grasp.

Officers pointed tasers at Lyde until he dropped to the ground and allowed himself to be handcuffed and taken into custody.

The man, Minister Zack Lyde is an anti-capitalist self-proclaimed “street advocate” with a radical past.
Here’s more video of the arrest from a sympathetic CNN:

CNN reported that the crazed counter protester is a minister.
Maybe he studied under Jeremiah Wright?…
Or, maybe he was just following orders?