Palin Responds to Dr. Death Panel: "How convenient that he disavowed his own work only after the nature of his scholarship was revealed"

Oh my. What are they going to do with Dear Sarah?
She’s killing them with her honest analysis of their plan to nationalize health care. 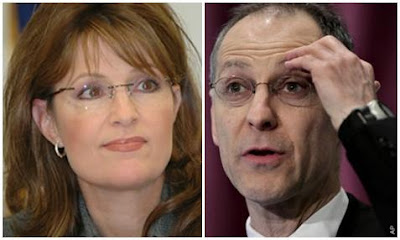 Last night Rahmbo’s brother “Dr. Death Panel” Ezekiel Emanuel attacked Sarah Palin on her death panel accusations saying the claims were “outrageous.” Later in the day the Senate decided to remove the death panels from Obamacare legislation– the same provision that Emanuel said was not included in the bill.

This morning Sarah Palin answers Zeke.
“”How convenient that he disavowed his own work only after the nature of his scholarship was revealed.”
Ouch!
Sarah’s latest facebook posting continues to blow holes in the democrat’s plan to takeover health care.
She’s taking Obamacare down like a moose in the Alaskan wilderness:

I join millions of Americans in expressing appreciation for the Senate Finance Committee’s decision to remove the provision in the pending health care bill that authorizes end-of-life consultations (Section 1233 of HR 3200). It’s gratifying that the voice of the people is getting through to Congress; however, that provision was not the only disturbing detail in this legislation; it was just one of the more obvious ones.

As I noted in my statement last week, nationalized health care inevitably leads to rationing. There is simply no way to cover everyone and hold down the costs at the same time. The rationing system proposed by one of President Obama’s key health care advisors is particularly disturbing. I’m speaking of the “Complete Lives System” advocated by Dr. Ezekiel Emanuel, the brother of the president’s chief of staff. President Obama has not yet stated any opposition to the “Complete Lives System,” a system which, if enacted, would refuse to allocate medical resources to the elderly, the infirm, and the disabled who have less economic potential. [1] Why the silence from the president on this aspect of his nationalization of health care? Does he agree with the “Complete Lives System”? If not, then why is Dr. Emanuel his policy advisor? What is he advising the president on? I just learned that Dr. Emanuel is now distancing himself from his own work and claiming that his “thinking has evolved” on the question of rationing care to benefit the strong and deny the weak. [2] How convenient that he disavowed his own work only after the nature of his scholarship was revealed to the public at large.

The president is busy assuring us that we can keep our private insurance plans, but common sense (and basic economics) tells us otherwise. The public option in the Democratic health care plan will crowd out private insurers, and that’s what it’s intended to do. A single payer health care plan has been President Obama’s agenda all along, though he is now claiming otherwise. Don’t take my word for it. Here’s what he said back in 2003:

Last year, I issued a proclamation for “Healthcare Decisions Day.” [6] The proclamation sought to increase the public’s knowledge about creating living wills and establishing powers of attorney. There was no incentive to choose one option over another. There was certainly no financial incentive for physicians to push anything. In fact, the proclamation explicitly called on medical professionals and lawyers “to volunteer their time and efforts” to provide information to the public.

Comparing the “Healthcare Decisions Day” proclamation to Section 1233 of HR 3200 is ridiculous. The two are like apples and oranges. The attempt to link the two shows how desperate the proponents of nationalized health care are to shift the debate away from the disturbing details of their bill.

There is one aspect of this bill which I have not addressed yet, but it’s a very obvious one. It’s the simple fact that we can’t afford it. But don’t take my word for it. Take the word of Doug Elmendorf, the director of the nonpartisan Congressional Budget Office. He told the Senate Budget Committee last month…