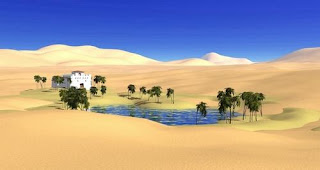 Here’s the latest from the Junk Science Nazis…
Global warming is being blamed for the greening of the Sahara Desert.
National Geographic reported:

Desertification, drought, and despair—that’s what global warming has in store for much of Africa. Or so we hear.

Emerging evidence is painting a very different scenario, one in which rising temperatures could benefit millions of Africans in the driest parts of the continent.

Scientists are now seeing signals that the Sahara desert and surrounding regions are greening due to increasing rainfall.

If sustained, these rains could revitalize drought-ravaged regions, reclaiming them for farming communities.

This desert-shrinking trend is supported by climate models, which predict a return to conditions that turned the Sahara into a lush savanna some 12,000 years ago.

The green shoots of recovery are showing up on satellite images of regions including the Sahel, a semi-desert zone bordering the Sahara to the south that stretches some 2,400 miles (3,860 kilometers).

Images taken between 1982 and 2002 revealed extensive regreening throughout the Sahel, according to a new study in the journal Biogeosciences.

The study suggests huge increases in vegetation in areas including central Chad and western Sudan.