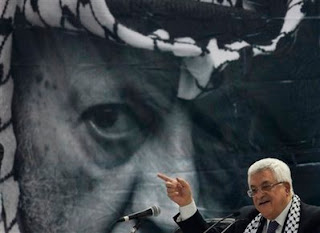 With a portrait of late Palestinian Yasser Arafat on the background Palestinian President Mahmoud Abbas speaks at the Fatah conference in the West Bank town of Bethlehem, Tuesday, Aug. 4, 2009. (AP)

Members of the Fatah group opened their Congress today in Jerusalem.
President Mahmoud Abbas said that Jerusalem was promised to the Palestinians.
YNet reported:

Abbas at Fatah congress: Jerusalem promised to us

Some 2,000 delegates gather in Bethlehem for festive political conference ‘in the name of our capital Jerusalem,’ on backdrop of battle over Palestinian national movement’s future. ‘Although we have chosen peace, we maintain the right to launch an armed resistance,’ Palestinian president says

Former Palestinian Prime Minister Ahmed Qureia on Tuesday morning launched the historic Fatah congress in the West Bank city of Bethlehem, which is slated to elect the future leadership of the Palestinian movement.

“In the name of the shahidim (martyrs) and in the name of Jerusalem, the capital of the Palestinian state, we hereby declare the opening of the sixth congress of our movement, the Fatah movement,” Qureia said, standing next to Palestinian President Mahmoud Abbas.

The Palestinian president, who is seeking to bolster his status and leadership, lashed out at the start of the meeting against “the princes of darkness, who are dividing the homeland and the people and harming democracy, by preventing Fatah members from joining the conference.” He was referring to Hamas members in the Gaza Strip.

The Vicious Babushka has more from the convention.

Israeli Information Minister Yuli Edelstein referred to the Fatah congress being held in Bethlehem as “a declaration of war.”