For the first time since he smeared this nation’s police force by saying an officer had acted stupidly for arresting his out of control racist Harvard friend, Barack Obama’s presidential index numbers are back in negative double digits.

It’s not just his record deficits that people are upset about. Obama’s goal of taking over the nation’s health care industry has Americans riled. 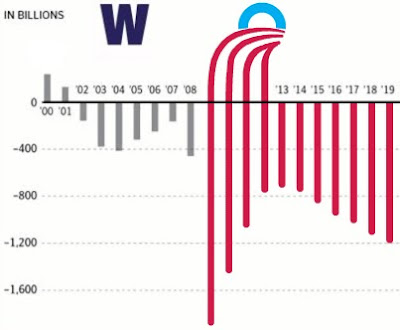 Thanks John for the graph!
The Obama Administration announced last night that they had lowballed their record deficit figure by $2 trillion.

The Rasmussen Reports daily Presidential Tracking Poll for Saturday shows that 29% of the nation’s voters Strongly Approve of the way that Barack Obama is performing his role as President. Thirty-nine percent (39%) Strongly Disapprove giving Obama a Presidential Approval Index rating of -10 This is the first time since July 31 that the President’s Approval Index has fallen to negative double digits (see trends).