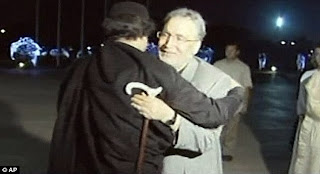 Abdel Baset al-Megrahi, (right), who was found guilty of the 1988 Lockerbie bombing, is greeted by Libyan leader Gaddafi in Tripoli. (Daily Mail) 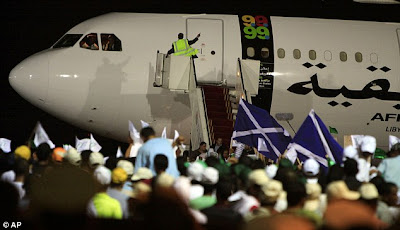 Images of Libyans waving Scottish flags have prompted outrage in Britain and the U.S. (Daily Mail)

The furor continued today in Great Britain after Libyan leader Colonel Gaddafi thanked Gordon Brown for the release of the Lockerbie bomber.
The Daily Mail reported:

The international furore over the release of the Lockerbie bomber deepened today after he was seen embracing Libyan leader Colonel Gaddafi.

It came as Gordon Brown faced fresh pressure after shocking claims by Libya that the release of the bomber was linked explicity to trade deals benefiting Britain.

Gaddafi’s son Saif al-Islam said Megrahi’s case was discussed at every meeting between the then Prime Minister Tony Blair and the Libyan leader.

But the Foreign Office strongly denied any link between the boosting of UK business interests and the freeing of the man convicted of Britain’s worst terrorist atrocity.

A spokesman insisted: ‘No deal has been made between the UK Government and Libya in relation to Megrahi and any commercial interests.’

The growing sense of unease in Downing Street intensified today after Col Gaddafi praised ‘my friend’ Gordon Brown and the British Government for their part in securing Megrahi’s freedom.

So, are we supposed to believe that Barack Obama knew nothing about Meghahi’s release?
169 of the 243 people killed in the bombing were Americans.
Just wondering.