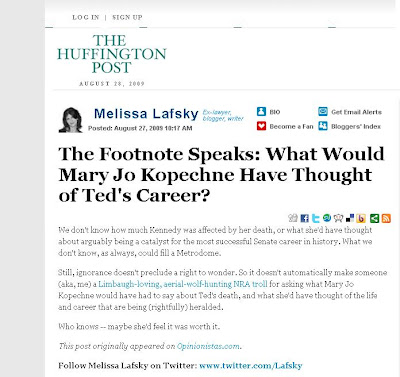 We don’t know how much Kennedy was affected by her death, or what she’d have thought about arguably being a catalyst for the most successful Senate career in history. What we don’t know, as always, could fill a Metrodome.

Still, ignorance doesn’t preclude a right to wonder. So it doesn’t automatically make someone (aka, me) a Limbaugh-loving, aerial-wolf-hunting NRA troll for asking what Mary Jo Kopechne would have had to say about Ted’s death, and what she’d have thought of the life and career that are being (rightfully) heralded.

Who knows — maybe she’d feel it was worth it.

OK, so maybe it’s not so shocking.
It is the Huffington Post, after all.