RadioVice Online reported today that the latest Battleground poll shows a 2 point jump in the percentage of Americans who consider themselves very conservative or somewhat conservative. The number jumped to 59% from 57% last year.

Yesterday, Gallup reported that a higher percentage of Americans consider themselves conservative over liberal in ALL 50 states. 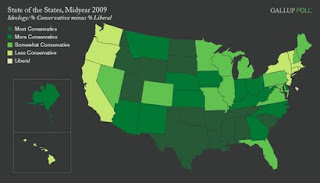 The only jurisdiction in which self-identified liberals outnumber conservatives: Washington, D.C.

Washington DC also topped all US cities in a study that found 95 percent of US greenbacks analyzed from there contained minute amounts of cocaine.