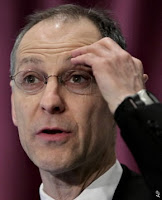 Dr. Ezekiel Emanuel, the health-policy adviser at the White House’s Office of Management and Budget — who has been caricatured by conservatives as a “Dr. Death” seeking to pull the I.V.s out of your grandparents’ arms in the name of cost containment — is not happy.

Asked by ABC News in an interview about the thoroughly discredited claim by former Alaska Gov. Sarah Palin to paint his philosophical writings as evidence — along with a provision providing optional end of life counseling in the House Democrats’ health care reform bill — that President Obama wants to set up “death panels” to deny medical treatments to seniors and the disabled, including her son Trig, Emanuel, brother of White House chief of staff Rahm Emanuel, does not hold back.

“It’s an absolute outrage that you would take first of all a provision written in the bill,” Emanuel says, “A provision allowing for doctors to talk to patients about end of life care, and turn it into the suggestion that we’re going to have euthanasia boards — that’s a complete misreading of what’s there. It’s just trying to scare people.”

Emanuel says as an oncologist he’s had hundreds of discussions with patients about what to do when treatment doesn’t work.

Related… The New York Post reported this past weekend on what the elderly and non-contributing members of society can expect under the democrat’s health care bill and it is quite shocking. The article focused on Rahm Emanuel’s brother Dr. Ezekiel Emanuel who was tapped as a White House Health Care policy adviser. Dr. Emanuel is also a proponent of state-assisted suicide. The Post describes the future of elderly and disabled patients under Obamacare.

Emanuel wants doctors to look beyond the needs of their patients and consider social justice, such as whether the money could be better spent on somebody else.

Many doctors are horrified by this notion; they’ll tell you that a doctor’s job is to achieve social justice one patient at a time.

Emanuel, however, believes that “communitarianism” should guide decisions on who gets care. He says medical care should be reserved for the non-disabled, not given to those “who are irreversibly prevented from being or becoming participating citizens . . . An obvious example is not guaranteeing health services to patients with dementia” (Hastings Center Report, Nov.-Dec. ’96).