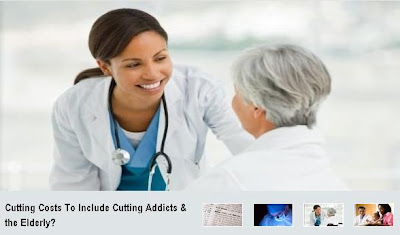 Cutting Costs To Include Cutting Addicts & the Elderly?

“Canada’s top doctor: The health care system is ‘imploding’.” That was the headline on the Drudge Report this past Sunday. Canadian top doctors are meeting this week in Saskatoon. Their primary objective will be to find ways to fix the broken and imploding Canadian health care system. The annual meeting will include discussions on ways to stay ahead of the immediate day-to-day demands. The doctors will learn that competition should be “welcomed, not feared.” The Canadians will also discuss the role of private health-care systems within the public plan. Canada needs to cut costs. Their national health care system is not working. It’s too expensive and inefficient and changes need to be made.
South of the border Barack Obama and democrats are trying to persuade America that they are going to cover 46 million Americans with their nationalized plan and cut costs at the same time. Of course, this is absurd. First of all, according to The Spectator that “46 million” number is misleading. 9.7 million Americans included in this 46 million are not United States citizens. Another 14 million of the uninsured are eligible for Medicaid and SCHIP but have never signed up for the programs. They could sign up for government insurance if they ever make a visit to the emergency room. Another 17.6 million of the uninsured had annual incomes of more than $50,000 and chose not to buy insurance. This leaves you with somewhere around five to ten million Americans without insurance. But, democrats want to include all 46 million under their plan anyway.

As far as cutting costs, the non-partisan Congressional Budget Office reported that no savings would be realized under the democratic health care plan. Douglas W. Elmendorf, director of the Congressional Budget Office, also offered a skeptical view of the cost savings that would result from the preventive care part of the plan. The democratic preventative care plan would lead to higher, not lower, spending overall.

So what will the government do to trim expenses if democrats are able to ram their nationalized health care bill through Congress?…