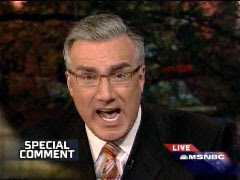 From the LA Times corrections page:
(Click to Enlarge)

“TV listings: The Prime-Time TV grid in Thursday’s Calendar section mistakenly listed MTV’s “Jackass” show on the MSNBC cable schedule at 7 and 10 p.m. where instead MSNBC’s “Countdown With Keith Olbermann” should have been listed.”

Even a broken clock is right twice a day.