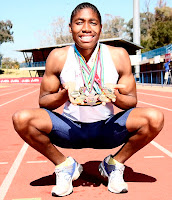 The BBC has seen the birth certificate of South African athlete Caster Semenya, which states that the new 800m world champion is female.

Ms Semanya, 18, has been told to take a gender test after several remarkable improvements in recent performances.

The case has provoked an angry reaction in South Africa, where many have said she has been unfairly treated.

Here‘s an interview with Caster Semenya.