Russ Carnahan figured that the best way to deal with constituents who do not agree with massive government spending and debt was to force them outside: 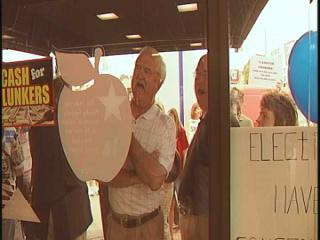 (KSDK)
Rep. Russ Carnahan was clobbered by tea party protesters at his Cash for Clunkers rally today in St. Louis.
The protesters who disagreed with Carnahan were forced outside of the dealership.
KSDK has video from his event today at McMahon Ford in St. Louis City.

With shouting protesters at the door, U.S. Congressman defended the cash for clunkers program today at St. Louis’ McMahon Ford.

Rep. Carnahan talked about the popularity of the program and the progress in the pursuit for $2 billion in additional funding.

Groups outside were demonstrating against government spending. They held up signs against cash for clunkers as well as the proposed health care reform.

Carnahan was the co-sponsor of the original piece of legislation to get the cash for clunkers program started. He says the government is close to approving more funding to help people get rid of their gas-guzzlers and get into more fuel-efficient and environmentally better cars.

54% of Americans oppose more money for Cash for Clunkers.

More… Dana Loesch has video of Carnahan getting flustered at the rally.

UPDATE: Figures. Cash for Clunkers is a big win for Japan and Korea— Does nothing for Big 3.

UPDATE 2: Carnahan snuck out the back door.