On August 6, 2009, black man selling conservative flags and pins was attacked by the SEIU members at the Russ Carnahan town hall meeting. He suffered injuries to his knee, back, elbow, shoulder and face from the attack. He was also called the n-word by the union thugs before they beat him.

Yesterday, several local black conservatives held a rally at the St. Louis NAACP headquarters over their non-response to the attack. 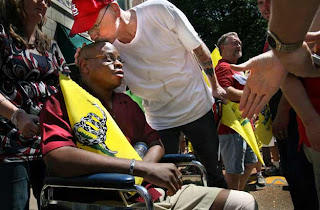 Kenneth Gladney, who was injured in a scuffle at a health forum on Aug. 6, is greeted by well-wishers, including Jeff Tatum, during a protest Aug. 8 in St. Louis. The demonstration was held by members of the St. Louis Tea Party. (Robert Cohen/P-D)

Gladney to KMOX reporters: “Why hasn’t the NAACP come to my aid?” 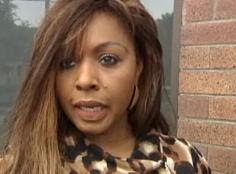 Several local black conservatives held a protest at the NAACP in St. Louis over the groups handling of the Kenneth Gladney attack.
The Post Dispatch reported:

A conservative African-American social networking group set out Monday morning to criticize the city’s NAACP chapter for not supporting a black man who said he was beaten outside a forum on aging earlier this month.

But the effort was cut short when the head of the civil rights group showed up at the news conference and said that no one had asked the NAACP to investigate the claims.

“The St. Louis branch of the NAACP will and does accept and investigate all written complaints filed with us, regardless of the complainant’s ideology,” said Claude Brown Sr., president of the St. Louis City NAACP. “We regret that a group has decided to protest outside our office before contacting us or filing such a complaint.”

The group, Move-On-Up.org, bills itself as a 400-member social network of African-Amercan Republicans, conservatives and moderates. It called a news conference outside of the NAACP office in the Central West End to show its support for Kenneth Gladney, a conservative activist who was selling “Don’t Tread on Me” flags and buttons outside a forum Aug. 6 conducted by Rep. Russ Carnahan in south St. Louis County.

Since when does the NAACP need a written request from the black victim of a violent racial attack to start an investigation? 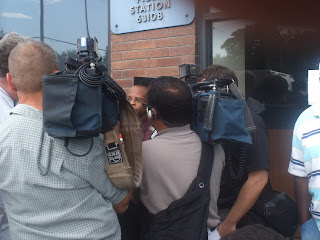 Kenneth Gladney spoke with reporters at the rally. (Moveonup.org)