The White House, ACORN, the SEIU and Democrats have been bussing supporters to town hall meetings across the country.
But, the AP is reporting that it is actually conservatives who are being bussed in to the meetings. 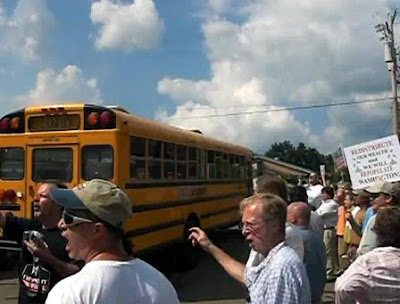 Shameless. The AP today smeared the tea party protesters. They reported that they were bussed in to town hall meetings.
The AP reported this in their article on FOX News:

Tim Phillips, president of Americans for Prosperity, a group that is busing demonstrators across the country to health care forums held by members of Congress, said other news organizations seem more interested in who is helping to organize protests. Fox doesn’t ignore the protesters’ concerns, he said.

“Is Fox more critical of Obama than MSNBC? Of course,” Phillips said. “But when you look at what is happening, Fox is actually covering it.”

I contacted Mary Ellen Burke the State Communications Director at Americans for Prosperity this morning. She confirmed that this report by the Associated Press was not accurate. AFP is not bussing any of the grassroots demonstrators into the town hall meetings or any meetings across the country.