Sheila Leavitt is not a real life doctor– but she does play one at town hall meetings…
When she’s not filling up her car with grease.
Buck’s Right found another phony protest doctor.

I’m having trouble finding evidence that an ObamaCare supporter who spoke at Barney Frank’s town hall meeting last night, identified by the Associated Press and other media outlets as a Newton, MA doctor, actually is a doctor. 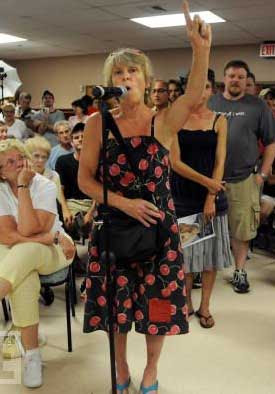 Here’s what the Associated Press had to say.

Others at Tuesday’s meeting were more supportive of reform.

Dr. Sheila Leavitt, a physician from Newton, said she hoped for changes that would support primary care physicians who aren’t paid as much as specialists. She said some of the rowdy critics at Tuesday’s meeting appeared to be using the same “talking points” as those who showed up at similar meetings around the country.

As far as I can tell, she is not listed as a licensed Physician at the Massachusetts State Medical Board web site. Several “Leavitts” are doctors in Massachusetts, but none are named “Sheila.” Just for kicks I tried the Associated Press’ original misspelling of the name, “Levitt,” and also found no “Sheila” as a licensed doctor. 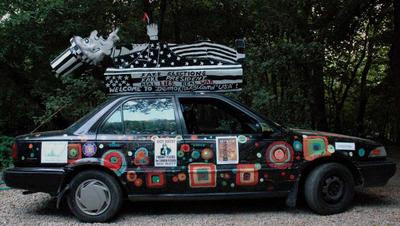 Sheila Leavitt, who owns the protest car, shown here has been noticed by Margery Eagan of the Boston Herald who wrote:

You could call Sheila Leavitt a nutty, annoying, unrelenting Newton leftie who home-schools the kids and raises chickens to share eggs with neighbors, not to eat. She is, of course, a vegetarian.

I see her as one of those rare people who puts their convictions on parade, then faces uneasy consequences. Like the beefy, mad, middle-aged guy who followed her around the Esplanade yesterday, before dawn, tearing down her “Impeach Bush” posters as fast as she put them up. Or the trucker she said rear-ended her at a Mass Pike toll booth, sending her head into the steering wheel of her ’88 Toyota Corolla with bumper stickers saying “War is barbaric” and “Support our troops . . . Draft Jenna and Barbara,” as in Bush.

How much easier, really, discretion? Or just waving the flag and sticking your popular “Support the Troops” yellow ribbon on the rear window.

No one’s going to rear-end you for that.

Well, you should’ve seen Sheila Leavitt’s in-your-face Toyota yesterday as this 54-year-old trained physician and mother of four in sundress and flip-flops did her “one-person protest parade” through the Back Bay and South End.

Kate adds: The only thing I can’t find is evidence of a practice.

More… The Boston Globe reported in 2007 that Leavitt filters cooking oil in her basement to fuel her Volkswagen Beetle.
— A Sheila Leavitt protested Condi Rice in 2006.
— Sheila Leavitt is the founder of StopTrafficNewEngland.org, an expired domain.

–Any help on the Sheila Leavitt’s background is appreciated.

Massachusetts licenses every last danged thing. If you want to fix your neighbors porch you need a $150 license to do so.

If the medical licensing board website does not list her as having a medical license, then she is NOT practicing medicine in the state of Massachusetts.

Still More… Kate adds this in the comments:

I just called the AP in Massachusetts, told them there were questions being raised about Sheila Leavitt, and they’re going to look into it.

I suggested they try Google.

That’s www.google.com in case they have trouble.

UPDATE: She’s a realtor.
At least that’s what she says here.
…But, then again, she probably doesn’t have a realtor’s license either.

UPDATE 2: A commenter who claims to be “The Son” confirms that she never practiced medicine.

There is a Sheila Leavitt and Andrew Lichtman who own a single family home in Newton, MA:

Whoever the lady is, she doesn’t and hasn’t published in any reputable journal in the last thirty years (http://www.ncbi.nlm.nih.gov/sites/entrez). That wasn’t so unusual thirty or even fifteen years ago for doctors, but over the last fifteen years, medical professionals have increasingly been expected to contribute to research, so apparently raising her kids (honorable enough) and protesting (laughably) are her professions.

What is it with these Democrats and their attraction to fake doctors? Well, the answer is very simple. Everything they are doing is fake; everything is a head fake; everything is deceit; everything is fraud. They have to send the union thugs out to try to intimidate the people who are showing up out of genuine passion. It’s so great because they’ve got all this power, and now they’re just showing everybody who they are, what they are, and people are seeing it. And when Obama loses that commodity that he had, the trust, you don’t get that back. When people start doubting you, and you are The Messiah, and you lose your messianic status, I don’t know how you get it back.