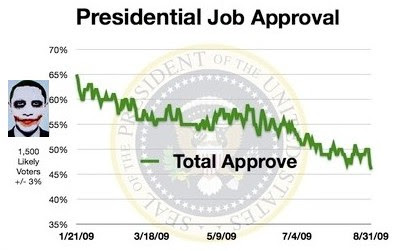 Hat Tip Rod
Only 46% of Americans approve of Barack Obama’s performance down 19 points since the start of the year.
Rasmussen reported:

The Rasmussen Reports daily Presidential Tracking Poll for Monday shows that 30% of the nation’s voters Strongly Approve of the way that Barack Obama is performing his role as President. Forty-one percent (41%) Strongly Disapprove giving Obama a Presidential Approval Index rating of -11 (see trends)…

Overall, 46% of voters say they at least somewhat approve of the President’s performance. That’s the lowest level of total approval yet measured for Obama. Fifty-three percent (53%) now disapprove. Eighty-one percent (81%) of Democrats approve while 83% of Republicans disapprove. As for those not affiliated with either major party, 66% disapprove. See other recent demographic highlights from the tracking polls.