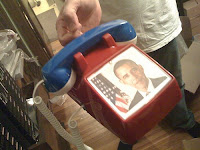 (Flickr)
Brilliant. Michael Steele was not about to let angry lib kooks leave unhinged messages for the RNC. Instead he redirected their calls to the DNC switchboard.
The Washington Independent reported that Steele was behind the scheme:

On today’s call with reporters, Republican National Committee Chairman Michael Steele took credit for the RNC’s response to a new Democratic National Committee ad asking voters to call Republicans and tell them to stop ginning up town hall heckling. The RNC redirected these calls from its main switchboard over to the DNC’s switchboard — a response, said Steele, to the White House arrogantly blaming regular Americans “like my mother, like my sister” for the health care impasse.

“I thought it was a good idea,” Steele said. “Don’t sit there and think you’re going to direct a bunch of angry liberals to call the RNC when I know full well what that’s all about. I get the joke. My response was, talk to your own party, because they’re the ones ginning this up.”