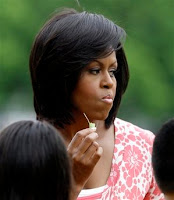 First lady Michelle Obama eats a pea with fifth graders from Bancroft Elementary School in the First Lady’s Garden after they harvested some of the vegetables that they planted in a garden on the South Lawn of The White House in Washington, Tuesday, June 16, 2009. (AP/Alex Brandon)

The White House garden is full of lead.
The AP reported:

The White House says its high-profile garden on the South Lawn has tested positive for lead although it is not at dangerous levels.

First lady Michelle Obama planted the garden on the South Lawn this spring with local schoolchildren. Produce from it is used in the White House kitchens and donated to area groups.

The White House chefs have been preparing the garden’s beans for dinner every other day and the fresh herbs are used nightly. Dee-lish!
Hat Tip Larwyn