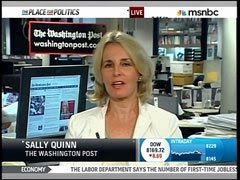 Appearing on MSNBC Thursday afternoon, Washington Post writer and founder of the paper’s On Faith blog, Sally Quinn, exclaimed of Sarah Palin: “Well, clearly, she has not put her family first…And these children have, it seems publicly, to have been exploited by her in a, I think, really unfortunate way.”

Even anchor David Shuster, who on Wednesday declared that Palin had “no future” politically, questioned Quinn’s accusation: “Sally, the use of the word ‘exploited’ is pretty strong. Give us some specific examples that you think qualifies for that?” Quinn was happy to elaborate: “Well, you know, she brings them all to the convention, including Trig, the baby. She brings the pregnant daughter with the boyfriend who clearly didn’t want to be there. She then travels around with the children, using them as sort of photo ops…she brings the children up when she needs them to shore up her own image.”

Quinn even seemed to blame Palin for defending her family against David Letterman’s attacks: “It just seemed to me that the David Letterman situation where she whipped that up into a huge scene, bringing in her other daughter Willow and making a big – a big to-do about it when she could have just let it go.“

Sally Quinn already was forced to apologize for previous attacks on Sarah Palin.

Sally Quinn had a child with VCFS (a syndrome next in line to Downs Syndrome). While this child is now a young adult, mom-Sally carried on a occupation, pursued a career and was able to get out a book all while her disabled son was growing up. The same thing that she condemns Sarah Palin for, oh, wait…Sarah’s book is not out yet.