Thanks Barack.
The US Unemployment Rate is now at 9.7%. 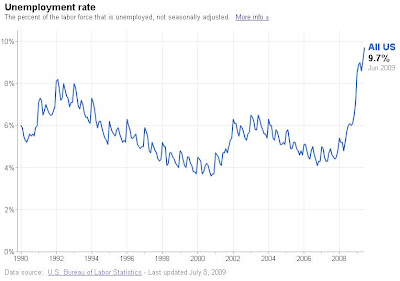 U.S. Bureau of Labor Statistics
Hat Tip Danny Morris
This is the highest unemployment rate in at least 26 years.

President Barack Obama on Tuesday declined to predict how high unemployment will climb but made clear he expects it to keep worsening for a while as hiring lags behind other signs of economic recovery.

“How employment numbers are going to respond is not year clear,” the president said on a day when he was headed to Michigan, home of a particularly battered economy. “My expectation is that we will probably continue to see unemployment tick up for several months.”

The unemployment rate stands at 9.5 percent, the highest in 26 years.