Figures. All of the audience members called on by Obama at his Virginia town hall meeting were supporters.
The Weekly Standard reported on this from The Washington Post:

“The president called randomly on three audience members. All turned out to be members of groups with close ties to his administration: the Service Employees International Union, Health Care for America Now, and Organizing for America, which is a part of the Democratic National Committee. White House officials said that was a coincidence.”

This wasn’t the first time.
Dear Leader’s town hall participants at the White House in March were ALL campaign supporters or donors. 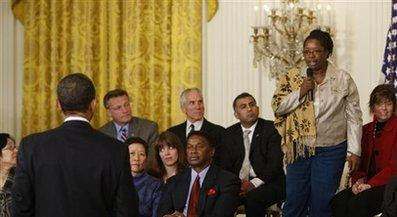 President Barack Obama listens to a question from teacher Bonnee Breese, right, of Philadelphia, as he takes part in an Internet town hall meeting, Thursday, March 26, 2009, in the East Room of the White House in Washington. (AP Photo/Ron Edmonds)