This is weird. She’s not an Obama? 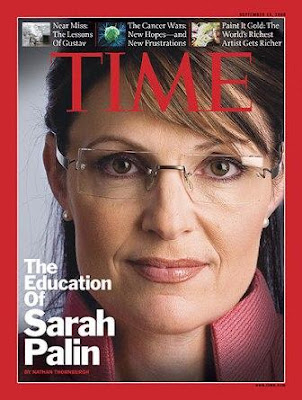 The Return of Scipio wants to know…
Just who’s schooling whom?

No doubt, it’s probably another enthusiastic endorsement of Governor Palin and her family (kidding).

She also needs a shrewder, cooler take on the mainstream media, with its preening bullies, cackling witches, twisted cynics and pompous windbags. The Northeastern media establishment is in decline, and everyone knows it…

The vicious double standard is pretty obvious. Only the tabloids, for example, ran the photos of a piss-drunk Chelsea Clinton, panties exposed, falling into her car outside London clubs a few years ago. If Chelsea had been the scion of Republican bigwigs, those tacky scenes would have been trumpeted from pillar to post in the U.S. as signals of parental failures or turmoil in clan Clinton. As a Democrat, I detest the partisan machinations that have become standard in Northeastern news management and that are detectable in editorial decisions at major metropolitan newspapers nationwide. It’s why I, like a host of others, have shifted my news gathering to the Web.

As to your question “How have we come to this pass in America where the assassination of top government officials is fodder for snide jokes on national radio?” let me outline the path off the top of my head.

My first memory of such a case was watching Alec Baldwin in 1998 demand that Henry Hyde, the Republican chairman of the House Judiciary Committee, be stoned to death. Baldwin went on to demand that after that execution, the killing extravaganza should continue to the chairman’s house, where his wife and children would be killed as well, along with the families of other Republican politicians whom Baldwin did not agree with. Baldwin later claimed it was just a joke, but I remember watching this on “Late Night With Conan O’Brien,” and I can assure you there was nothing funny about it in tone or substance. Baldwin’s rage was chilling, his assassination endorsement grotesque.

Second, Randi Rhodes on her Air America show in 2004 compared George W. Bush to Fredo Corleone and said he should be taken out fishing — and imitated the sound of a gunshot. The third thing was the 2006 film “Death of a President,” featuring the assassination of George W. Bush while he was still a sitting president. I understand the purpose of the film was to explore the fallout of a modern assassination in the new media environment, but that could have been accomplished with a fictitious current president — as is done in countless films, TV shows and books. In an environment that treats assassination so casually, it was inevitable that it would become joke fodder.