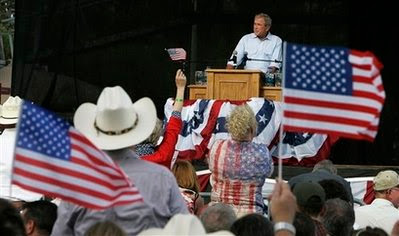 A rural Oklahoma town greeted George W. Bush today with thunderous applause.
Bush was given 6 standing ovations as he spoke on Independence Day in a remodeled rodeo arena.
The New York Times reported, via Free Republic:

Former President George W. Bush spoke amid thunderous applause in a rural Oklahoma town to celebrate the Fourth of July, calling the U.S. the ”greatest nation on the face of the earth.”

Bush was given six standing ovations as he spoke Saturday inside a remodeled rodeo arena in Woodward, a town of about 12,000 residents in northwest Oklahoma. About 9,200 tickets were sold for the event, which would be the biggest crowd for Bush since he left office in January.

Bush spoke of the bravery of injured soldiers he’d met throughout his presidency, and thanked members of the military for their service. He also thanked spectators for giving ”a retired guy something to do.”

Bush has turned up in a handful of out-of-the-way places since leaving office.