Well that only took 5 months. 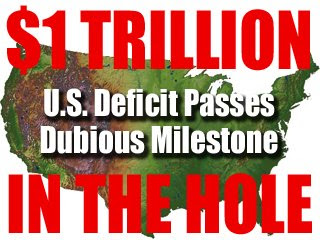 It’s too bad he can’t blame Bush for this.
Barack Obama became the first president ever to witness the US deficit top $1 trillion dollars under his watch today.
FOX News reported:

Nine months into the fiscal year, the federal deficit has topped $1 trillion for the first time.

The imbalance is intensifying fears about higher interest rates and inflation, and already pressuring the value of the dollar. There’s also concern about trying to reverse the deficit — by reducing government spending or raising taxes — in the midst of a harsh recession.

The Treasury Department said Monday that the deficit in June totaled $94.3 billion, pushing the total since the budget year started in October to nearly $1.1 trillion.

The deficit has been propelled by the huge sum the government has spent to combat the recession and financial crisis, combined with a sharp decline in tax revenues. Paying for wars in Iraq and Afghanistan also is a major factor.

The country’s soaring deficits are making Chinese and other foreign buyers of U.S. debt nervous, which could make them reluctant lenders down the road. It could force the Treasury Department to pay higher interest rates to make U.S. debt attractive longer-term.

“These are mind boggling numbers,” said Sung Won Sohn, an economist at the Smith School of Business at California State University. “Our foreign investors from China and elsewhere are starting to have concerns about not only the value of the dollar but how safe their investments will be in the long run.”

How about that Stimulus Bill? Related… Rep. Mike Pence said today that the Stimulus Bill is not working.
Yeah, we know.