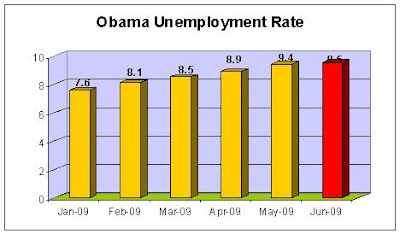 Under President Obama the unemployment rate reached a 26 year high in June.
The AP reproted:

Employers cut a larger-than-expected 467,000 jobs in June, driving the unemployment rate up to a 26-year high of 9.5 percent, suggesting that the economy’s road to recovery will be bumpy.

The Labor Department report, released Thursday, showed that even as the recession flashes signs of easing, companies likely will want to keep a lid on costs and be wary of hiring until they feel certain the economy is on a solid ground.

June’s payroll reductions were deeper than the 363,000 that economists expected.

…If laid-off workers who have given up looking for new jobs or have settled for part-time work are included, the unemployment rate would have been 16.5 percent in June, the highest on records dating to 1994. 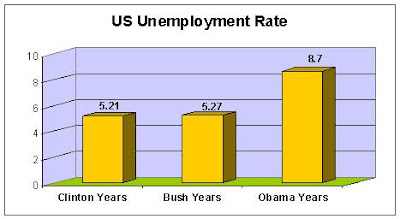 “First and foremost, the American people are concerned about the economy, job creation and the unsustainable debt obligations incurred in the last 6 months.
Beginning in January, House Republicans laid out a serious and substantive agenda that put jobs first. House Democrats, along with the White House, instead took an unfocused, ‘go it alone’ approach that has fallen well short of its goals and has failed to create jobs.

“Inexplicably, instead of focusing on jobs and restoring the financial security that has been lost by millions of struggling families, the President continues to push an agenda that the majority of Americans are uneasy with. The American people do not support a government healthcare plan that will increase costs, reduce patient choice and flexibility, and lower the quality of care available in our country. The American people do not support the radical Cap & Tax plan which will impose a hard-hitting tax upon families and small businesses costing our struggling economy thousands of jobs.

“As job losses continue to mount, families’ worries about losing their healthcare, paying their mortgage, and sending their children to college continues to intensify. Employment must be our focus, yet Speaker Pelosi and the unchecked Democrat majorities continue to increase Washington’s hand in the free market, at the expense of job creation. At some point, even the Speaker must realize that enough is enough.