This is something we’ve come to expect.
Another state-run media hit piece on the GOP.

Today Yahoo headlines their news with an article on the “GOP’s troubled class of 1994.” 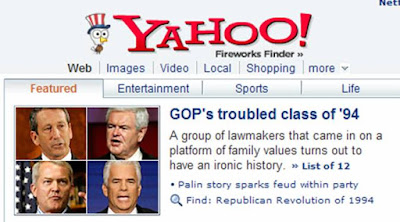 “A group of lawmakers that came in on a platform of family values turns out to have an ironic history.”

The hit piece written by Leftist Michael Falcone from The Politico c;aims that the 1994 Contract with America was a statement on family values.
It wasn’t.
It was about cleaning up the cesspool in Washington.
To refresh your memory, here is a copy of the Contract With America:

Thereafter, within the first 100 days of the 104th Congress, we shall bring to the House Floor the following bills, each to be given full and open debate, each to be given a clear and fair vote and each to be immediately available this day for public inspection and scrutiny.

1. THE FISCAL RESPONSIBILITY ACT: A balanced budget/tax limitation amendment and a legislative line-item veto to restore fiscal responsibility to an out- of-control Congress, requiring them to live under the same budget constraints as families and businesses. (Bill Text) (Description)

2. THE TAKING BACK OUR STREETS ACT: An anti-crime package including stronger truth-in- sentencing, “good faith” exclusionary rule exemptions, effective death penalty provisions, and cuts in social spending from this summer’s “crime” bill to fund prison construction and additional law enforcement to keep people secure in their neighborhoods and kids safe in their schools. (Bill Text) (Description)

6. THE NATIONAL SECURITY RESTORATION ACT: No U.S. troops under U.N. command and restoration of the essential parts of our national security funding to strengthen our national defense and maintain our credibility around the world. (Bill Text) (Description)

7. THE SENIOR CITIZENS FAIRNESS ACT: Raise the Social Security earnings limit which currently forces seniors out of the work force, repeal the 1993 tax hikes on Social Security benefits and provide tax incentives for private long-term care insurance to let Older Americans keep more of what they have earned over the years. (Bill Text) (Description)

Further, we will instruct the House Budget Committee to report to the floor and we will work to enact additional budget savings, beyond the budget cuts specifically included in the legislation described above, to ensure that the Federal budget deficit will be less than it would have been without the enactment of these bills.

Obviously, for the state-run media to insist today that this document was about “family values” is not true.
It’s just another hit piece on the GOP.

What’s the saying?…
When you don’t stand for something you’ll fall for anything?

And, when you’re a party that allows pimps, perps, murderers, and KKK kleagles to sit in office for decades, you have to constantly point out the flaws of your opposition.
Even if you have to make it up.