Judge Sonia Sotomayor tried to explain her “wise latina’ remarks that were caught on tape during the confirmation hearing this morning.
Here again is her racist statement from 2001:

“I would hope that a wise Latina woman with the richness of her experiences would more often than not reach a better conclusion than a white male who hasn’t lived that life,”

Real Clear Politics has the video. 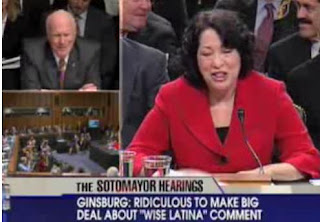 “No words I have ever spoken or written have received so much attention,” Sotomayor began.

Judge Sotomayor says she was telling an audience that she was trying to inspire a group to be “anything they wanted to become” through her own experiences.

“I do not believe that any ethnic, racial or gender group has an advantage in sound judging,” Sotomayor explained. “I do believe that every person has an equal opportunity to be a good and wise judge regardless of their background or life experiences,” she concluded.

Sadly, this doesn’t explain why Sotomayor repeatedly referenced “wise woman” in her speeches.

HotAir has a live video stream from the hearings.

Soto re-explains her wise Latina comments: It was a “bad play on words” that “fell flat.”

So bad she repeatedly used it a half-dozen times before friendly audiences.

Obviously, Sotomayor is not being honest.

UPDATE: Here’s more hogwash from Sotomayor this morning, via Republican.Senate.Gov:

JUDGE SONIA SOTOMAYOR: “[T]he Process Of Judging Is A Process Of Keeping An Open Mind. It’s The Process Of Not Coming To A Decision With A Prejudgment Ever Of An Outcome.” (Judge Sonia Sotomayor, Senate Judiciary Committee Confirmation Hearing, 7/14/09)

JUDGE SOTOMAYOR: “There is ‘no objective stance but only a series of perspectives…[N]o neutrality, no escape from choice’…in judging I further accept that our experiences as women will in some way affect our decisions. As aptly stated by Professor Minnow, “th[e] aspiration to impartiality is just an aspiration rather than a description because it may suppress the inevitable existence of a perspective…’” (Women in the Judiciary, Women’s Bar Association of the State of New York. 4/30/99)

JUDGE SOTOMAYOR: “I willingly accept that we who judge must not deny the differences resulting from experience and gender but attempt…continuously to judge when those opinions, sympathies and prejudices are appropriate.” (Women in the Judiciary, 40th National Conference of Law Reviews. 3/17/94)

UPDATE 2: Democrats are trying to cover up that Sotomayor is the worst nominee ever to the Supreme Court. Her decisions have been overturned 9 out of 10 times!
From the Republican.Senate.Gov website:

Judge Sotomayor’s Opinions Were Reversed, Vacated, Or Criticized Nine Out Of Ten Times By The U.S. Supreme Court

SEN. HERB KOHL (D-WI): “But In Only Three Out Of Those 230 Plus Cases Have Your Decisions Been Reversed By The Supreme Court.” (Sen. Herb Kohl, Senate Judiciary Committee Confirmation Hearing, 7/14/09)

One Of Judge Sotomayor’s Opinions Was Vacated

One Of Judge Sotomayor’s Opinions Was Criticized, Saying It “Flies In The Face Of The Statutory Language.”

dge Sotomayor’s outcome but faulted her for adopting a reading of the relevant tax statute that “flies in the face of the statutory language.”

What a trainwreck.
Democrats ought to be embarrassed.

UPDATE 3: The AP defends Sotomayor’s racist remarks— Does not mention that she has repeated this racist statement several times.

UPDATE 4: John Hinderocker on Sotomayor’s “wise latina” defense- “I’ve been on the fence as to whether Senators should vote to confirm Sonia Sotomayor, but this rather breathtaking dishonesty provides strong grounds to vote against her confirmation.”

LEAHY SAID: “You said that, quote, you ‘would hope that a wise Latina woman with the richness of her experiences would reach wise decisions.'”

THE FACTS: If that’s all Sotomayor said, the quote would barely have mattered to opponents of her nomination. The actual quote, delivered in a 2001 speech to law students at the University of California at Berkeley, was: “I would hope that a wise Latina woman with the richness of her experiences would more often than not reach a better conclusion than a white male who hasn’t lived that life.”

Jim Hoft
Jim Hoft is the founder and editor of The Gateway Pundit, one of the top conservative news outlets in America. Jim was awarded the Reed Irvine Accuracy in Media Award in 2013 and is the proud recipient of the Breitbart Award for Excellence in Online Journalism from the Americans for Prosperity Foundation in May 2016.
STUNNING: AMA Is Teaching Doctors How to Manipulate Information in Order to Coerce the Unvaccinated
Hazelwood School District Restricts Homecoming to Only VACCINATED Students and Discriminates Against the UNVACCINATED
Former AZ Senate Audit Spokesman Ken Bennett Tells John Fredericks What to Expect at Friday's Senate Forensic Audit Hearing (VIDEO)
SHAMEFUL: South Korean President Travels to Hawaii to Repatriate US Servicemembers' Remains -- Biden Admin Skips Event, Sends No One
Sidney Powell Announces Her Legal Team Will Depose Dominion's Eric Coomer for Questioning Later Today
See more...

"When Are You Going to Apologize? You're a Liar!" - Iraq War Veteran Shouts Down George W. Bush at Beverly Hills Fundraiser (VIDEO)