Sonia Sotomayor ought to be thrilled to hear this…

Obamacare is chock-full of the soft bigotry of stuffing unqualified individuals into the operating room and doctor’s offices. 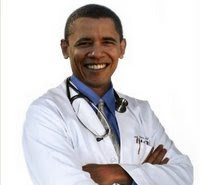 In case you were wondering what a post-racial presidency looks like…
Obamacare puts racial profiling above improved health care service.
Allan J. Favish at The American Thinker reported:

The bill does not state what would qualify as a “demonstrated record”, so we can expect medical schools and the other entities to do whatever they think they can get away with to train as many “individuals who are from underrepresented minority groups” as they think they might need to have a better “demonstrated record” in this regard then other entities competing for the grants and contracts. The Democrats’ health care bill creates a very significant financial incentive for medical schools and other entities to lower admission standards for “individuals who are from underrepresented minority groups” if that is what it takes to have the winning “demonstrated record”.

Related… And, Let Freedom Ring released this video on the care you can expect with Obamacare: