The National Soccer Team returned to Iraq this week. 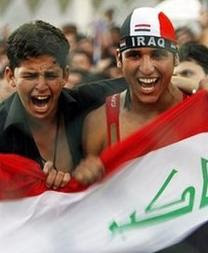 Iraqi soccer fans celebrate their national football team, who played its first home game since 2002. The first game since 2002 was played in Irbil on Friday July 10th. (AP) 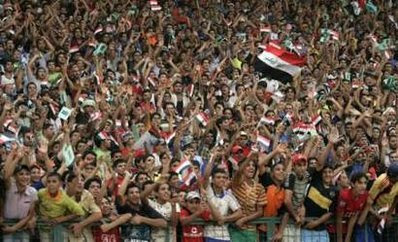 Iraqi supporters cheer for their team during a friendly soccer match against the Palestinian team at Shaab stadium in Baghdad July 13, 2009. Iraq’s national soccer team on Monday played its first international match in Baghdad since the 2003 U.S.-led invasion, beating Palestine 4-0. (REUTERS)

A roar went up when the national team jogged out, formed a circle at midfield and, as one, kissed the ground. It became deafening when Iraq’s Kurdish hero, Hawar Mulla Mohammed, scored the team’s first goal 27 minutes into the match.

Before the country’s liberation in 2003 Iraqi soccer players were often tortured by Uday Hussein, Saddam’s eldest son if the team performed poorly.

In 2007 democrats voted to surrender Iraq. Barack Obama said, “Preventing a potential genocide in Iraq isn’t a good enough reason to keep U.S. forces there.” But, thanks to George W. Bush, the security situation has improved and Iraqis enjoy their freedom today.
And, this week they enjoyed their soccer.