Shocker!… DC’s Alinskyite Regime Spreads Spoils Among Supporters.
Billions of dollars in federal aid has gone to those counties that supported Dear Leader Obama in the last election. 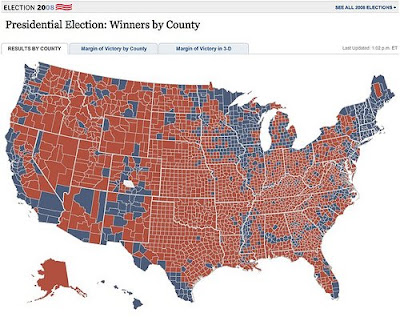 Billions of dollars in federal aid delivered directly to the local level to help revive the economy have gone overwhelmingly to places that supported President Obama in last year’s presidential election.

That aid — about $17 billion — is the first piece of the administration’s massive stimulus package that can be tracked locally. Much of it has followed a well-worn path to places that regularly collect a bigger share of federal grants and contracts, guided by formulas that have been in place for decades and leave little room for manipulation.

“There’s no politics at work when it comes to spending for the recovery,” White House spokesman Robert Gibbs says.

Counties that supported Obama last year have reaped twice as much money per person from the administration’s $787 billion economic stimulus package as those that voted for his Republican rival, Sen. John McCain, a USA TODAY analysis of government disclosure and accounting records shows. That money includes aid to repair military bases, improve public housing and help students pay for college.