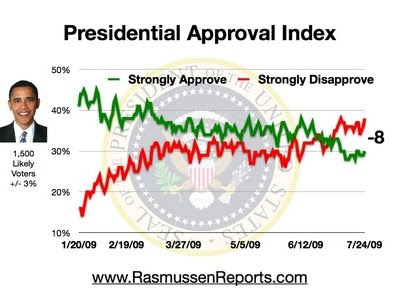 It looks like nobody bought his spin that he saved the economy after all.

Rasmussen Reports shows President Disaster has slid below the 50% approval rating for the first time today:

Overall, 49% of voters say they at least somewhat approve of the President’s performance. Today marks the first time his overall approval rating has ever fallen below 50% among Likely Voters nationwide. Fifty-one percent (51%) disapprove.

Just 25% believe that the economic stimulus package has helped the economy.

Fifty-three percent (53%) now oppose the Congressional health care reform package. That’s up eight points over the past month. Just 20% now see health care as the most important of the President’s priorities. Nearly twice as many, 37%, say deficit reduction is most important.