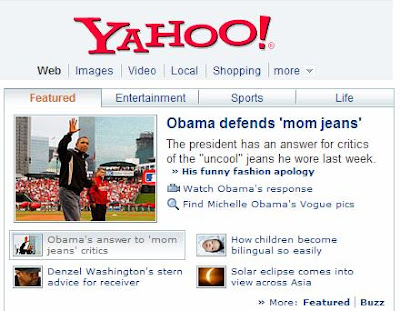 Once again for those of you who missed it…
Obama was booed at the All-Star Game in St. Louis last week:

And, he threw a dirtball sissy pitch.

But to top if off he wore his “mom jeans” to the game.
Today Obama defended his mom jeans.
The New York Post reported:

President Barack Obama acknowledges “I’m a little frumpy,” and says he’s not worried about it.

Asked in an NBC “Today” show interview about the well-worn bluejeans he wore to the pitcher’s mound to throw out the first pitch in last week’s major league baseball All-Star game, Obama said, “I hate to shop.”

He said that up until two years ago, he had only four suits and said “those jeans are comfortable.” He said he would leave it up to first lady Michelle to set the fashion pace at the White House, saying: “Here’s my attitude: Michelle, she looks fabulous. … For people who want a president to look great in tight jeans, I’m sorry.”

Guaranteed he spent more time thinking about his poor selection of jeans than he did about health reform.